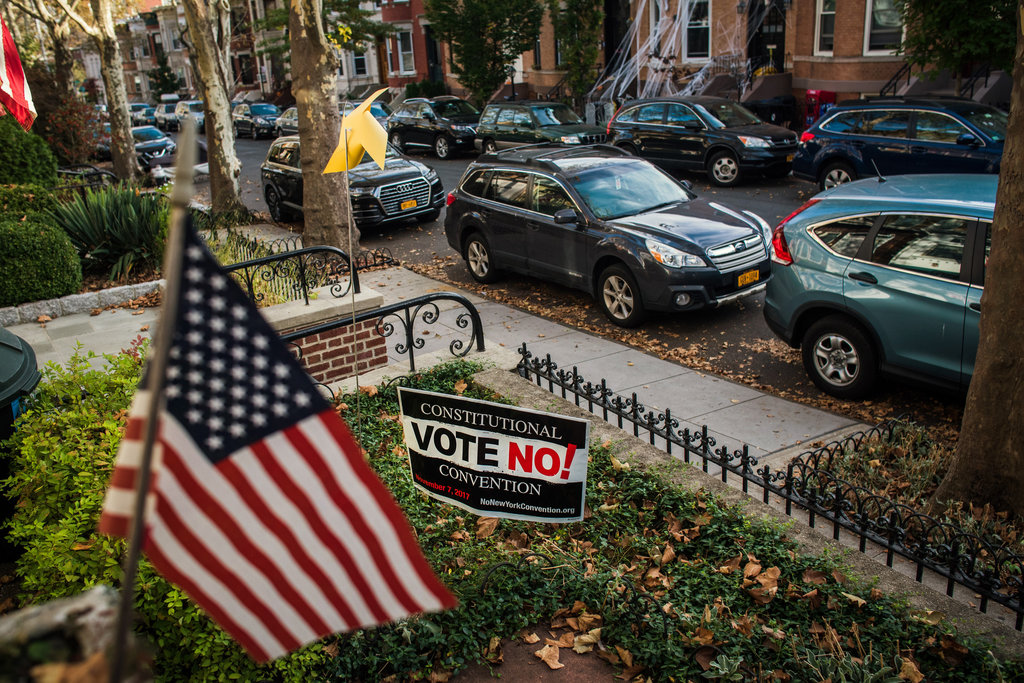 By Jesse McKinley
Nov. 7, 2017
ALBANY — New York voters gave a resounding thumbs down to a constitutional convention on Tuesday, once again rejecting an opportunity to open the state’s founding document to a full-scale overhaul after opponents stoked fears that such a convention could result in lost rights and benefits.

With most of the state’s election precincts reporting, “No” voters had easily defeated the ballot measure — known as Proposal One — with more than 80 percent of the vote.

The campaign against the constitutional convention drew a diverse collection of opponents, including conservative political groups, major labor groups like the A.F.L.-C.I.O., and liberal stalwarts like the New York branch of Planned Parenthood and the New York Civil Liberties Union. And while their concerns were often different, the basic logic of the anticonvention forces was similar: Such a convention could result in an erosion of protections for everything from collective bargaining rights to free public education.

A spree of advertisements called the convention a “con’s con,” suggesting that it would be vulnerable to back-room and unsavory deals. Opponents argued that the convention could cost hundreds of millions of dollars, which seemed to be an exaggeration, but the message proliferated on “No on Prop 1” lawn signs throughout the state.

The convention also faced opposition from the Republican leader in the State Senate, John J. Flanagan of Long Island, and the Democrat leader of the State Assembly, Carl E. Heastie of the Bronx. Gov. Andrew M. Cuomo, a Democrat with a re-election campaign looming next year, had initially offered qualified support for the convention, but he changed course on Monday, declaring he would vote against it because “the current delegate system does not offer enough protections to prevent the status quo and special interests from governing.”

“Defeating the constitutional convention ballot proposal is a tremendous victory for organized labor in New York and for all working people,” said Mario Cilento, president of the New York State A.F.L.-C.I.O., calling the opposition campaign a “priority issue for us” for the past two years.For supporters, who were outspent and saw early leads in the polls evaporate in the face of the autumnal advertising blitz, the convention had held out hope of a once-in-a-generation opportunity for ethics reform, changes to the judiciary and changing the balance of power in Albany, where governors often hold outsize influence. The last major revision to the Constitution — an enormous document that runs more than 50,000 words — was made during a convention in the 1930s, and supporters of the con-con, as it was called, said another revision was long overdue.

The State Constitution calls for public referendums on such conventions every 20 years, but voters also rejected conventions in 1977 and 1997. The last constitutional convention in the state was held in 1967, after a Democrat-led Legislature had asked for and received permission from voters. Even then, however, the suggestions of changes were later rejected by the same electorate that had approved the convention.

Progressive supporters of the 2017 campaign tried to play down worries about unwanted changes to the Constitution — such as diminishing pensions or cutting taxes on the wealthy — by noting that proposed revisions made by elected delegates would have had to be approved by voters in a separate referendum. Supporters had also complained that opponents of the convention were using scare tactics to drive the “No” campaign, complete with ads depicting the convention as a free-for-all for lobbyists and moneyed elites.

Bill Samuels, a progressive political activist and heavy financial backer of Proposal One, called the measure’s defeat “a triumph for all of the enemies of reform in Albany,” including Mr. Cuomo, the legislative leaders and “the lobbyists and special interests who thrive in New York’s pay-for-play culture of corruption.”

Mr. Samuels added, “For the groups that spent so many millions of dollars pushing for a ‘No’ vote, the burden now falls upon them to prove that they can actually bring about positive change in Albany.”

Government reformers could take small solace in the passage of another proposal on the ballot on Tuesday. It will allow the courts to “reduce or revoke” the pension of elected officials who are convicted of felonies related to their public duties. That change — which had also been approved by the Legislature — comes after a series of scandals ensnared various state lawmakers, who still were able to receive their pensions despite often also receiving prison time.

A third ballot measure addressed a plan to establish a land bank of up to 250 acres to allow upstate towns, villages and counties to use forest preserves “to address specific public health and safety concerns,” as well as infrastructure and recreation needs. Per the “forever wild” clause in the State Constitution — itself the product of a constitutional convention, in 1894 — forest lands are strictly protected and thus need such a ballot measure to allow a set-aside.

That measure, Proposal Three, seemed to be headed toward a narrow victory with more than 90 percent of precincts reporting.

And while supporters of a constitutional convention were disappointed, the dream will likely live on: The next vote on a con-con is due in 2037.