Schools throughout the country are grappling with teacher shortage, data show 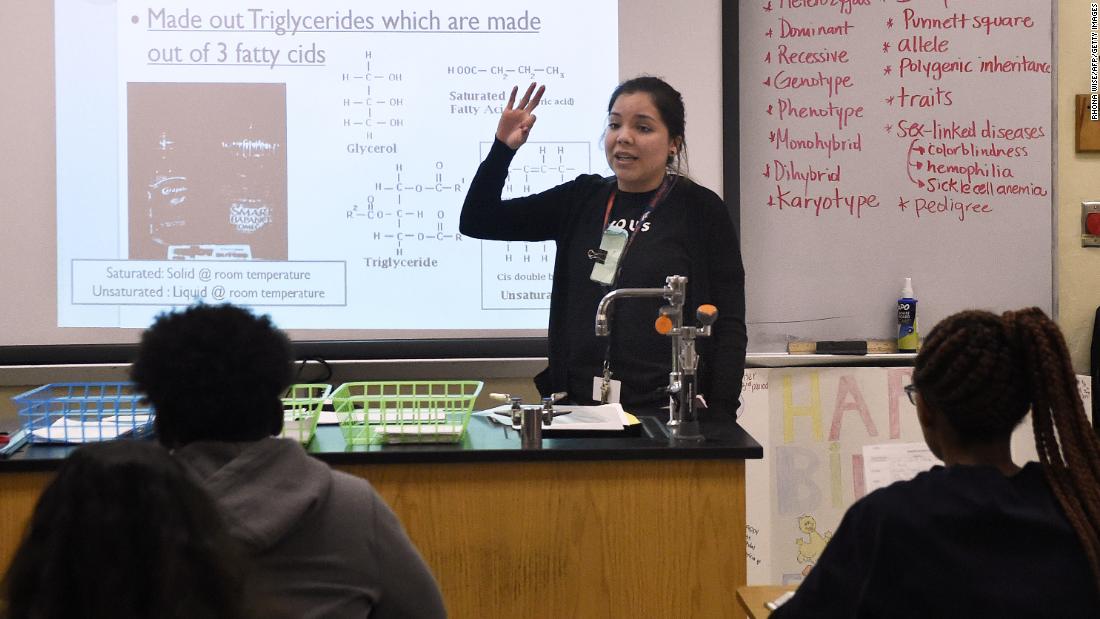 Virginia Escobar-Cheng teaches a science class at a high school in Homestead, Florida, in March.

(CNN)Lynn Sorrells started teaching 26 years ago because she loved seeing the light-bulb moment when a kid grasped a new concept.

She still does. But as principal of a high school in Dorchester County, Maryland, she is struggling to find an algebra and geometry teacher just weeks before her school year is set to begin.
As students head back to school, Sorrells’ district is one of hundreds across the country grappling with a growing teacher shortage — especially in key areas such as math and special ed.
“Currently, there are not enough qualified teachers applying for teaching jobs to meet the demand in all locations and fields,” said the Learning Policy Institute, a national education think tank, in a research brief in September.
Some schools, such as in New York City, are being forced to increase class sizes, which some studies show can reduce how much a student learns.
The institute estimated last year that if trends continue, there could be a nationwide shortfall of 112,000 teachers by 2018.

What subjects are most affected?

Public schools in 48 states and the District of Columbia report teacher shortages in math for the 2017-18 school year, according to the US Department of Education. Forty-six states report shortages in special education, 43 in science and 41 in foreign languages.
Statistics on shortages may be based on the percentage of unfilled teaching jobs, the number of emergency credentials given to those without traditional teaching certificates and the number of teachers hired after the school year starts, says Dan Goldhaber, director of the University of Washington’s Center for Education Data and Research.
It’s always been harder to fill teacher jobs in math, science and special education positions, Sorrells said. But the past five years have been worse than usual.
Increasingly, she said, teachers in areas like math and science are leaving for higher-paying private sector jobs after a few years.
As a result, many teachers who remain are being asked to do more. Some states, like California, are seeing classes with up to 35 students, says Linda Darling-Hammond, director of the Learning Policy Institute.
And some schools are making do without certain subjects.

Is there help on the way?

Probably not soon. The supply of aspiring teachers has been dwindling.
Nationwide, teacher education enrollments dropped 35% between 2009 and 2014, the most recent year for which data are available, according to the Learning Policy Institute.
A survey at UCLA found that freshmen’s interest in teaching as a career has steadily declined over the past decade.
And in Colorado, for example, the number of people becoming teachers and administrators fell more than 24% from the start of the 2010-11 school year to the end of the 2015-16 school year, according to the Department of Higher Education.

So what’s causing this?

Goldhaber, who studies educational trends at the University of Washington, sees two main reasons.
Math and science teachers aren’t paid enough. Salaries for US secondary school teachers have largely remained the same over the past two decades, according to the National Center for Education Statistics.
And students in the STEM fields (science, technology, engineering and math) can make more in other professions than they would teaching.
Teaching in the US is too demanding. About 8% of teachers leave teaching each year, with two-thirds quitting before retirement, according to the Learning Policy Institute. This is double the percentage of teachers leaving the profession in countries like Singapore and Finland.
This turnover is especially high in subjects such as special education, which can place additional demands on teachers.
“I’m having more of those conversations where teachers are questioning, ‘Do I want to put 30 years in public education?’ ” said Sorrells, the Maryland high school principal.
“The reality of contemporary public education … (is) that it’s amazing; it’s fulfilling; it’s a calling.” But it can also be exhausting, she says.

How do we fix it?

Goldhaber cites some solutions:
• Help students be more strategic about their teaching opportunities.When students enter teaching certification programs, let them know where the jobs are. In many parts of the country, they’ll have an easier time finding jobs to teach math or science than English.
• Partner school districts with local college and university programs.Though the teacher shortage is rooted partly in subject areas, it’s also a matter of location. Schools in low-income areas struggle more to fill positions. “It is the kids that are oftentimes most at risk that are the ones who are likely to suffer the most,” Goldhaber said.
One way to fix that would be to pull in students from local higher-ed programs to help teach in those areas. Many may stick around for a full-time job after graduation.
Sorrells says she also reaches out to private-sector employers to find people with expertise in certain fields who may be interested in teaching.
• Make teacher certification national instead of state by state. Prospective teachers must pass an exam specific to the state they want to work in. But if a teacher wants to move from, say, Pennsylvania to California, they can’t immediately apply for jobs there. By having a national certification exam, teachers would have more mobility to go where they’re needed.
At the end of the day, Sorrells believes schools are there to give students the most rigorous education they can.
Without quality teachers, she says, they can’t do that.
“I think at the most fundamental level, that’s most important,” she said. “I’ve got to be able to look my parents in the eye and say ‘the teachers standing in front of your child are the most competent, capable teachers anywhere.’ “