Nearly 2,300 students displaced from Puerto Rico have entered New York schools. 559 of those students came to Rochester, the most of any district in the state. Wochit 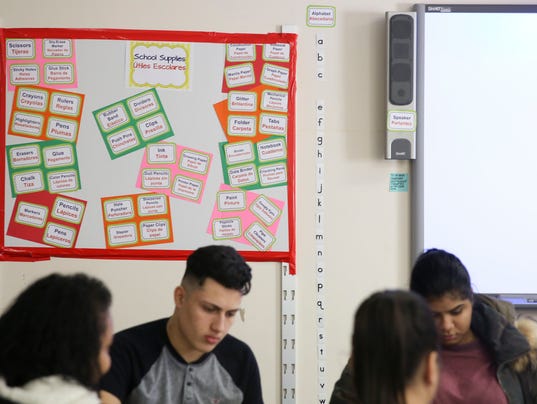 ALBANY – When Hilda Rosario Escher visited her family in hurricane-ravaged Puerto Rico in November, the wreckage was almost too much to bear.

So when she returned to Rochester, the head of the Ibero-American Action League vowed to do what she could to help families who left the island and moved to Rochester after Hurricane Maria.

“It was so disturbing to me what I saw that basically the news was not doing justice to what was going on there,” Escher recalled.

“And I came back and I figured there wasn’t much I could do for the people in Puerto Rico, but I could do something for the families coming here.”

There has been plenty of need across New York.

Nearly 2,300 students displaced from Puerto Rico have entered New York schools since the fall, with 559 of them in Rochester — the most of any district in the state, according to records obtained from the state Education Department.

The reasons for that displacement are very real.

Hurricane Maria crashed into Puerto Rico a little over six months ago, on Sept. 20, and parts of the island, a U.S. territory, are still reeling. Emergency crews have restored water to 99 percent of clients and power to 93 percent of customers, but more than 100,000 of them remain in the dark and there are frequent power outages.

If anywhere on the mainland went six days without power, much less six months, there would be cries of outrage.

Plus, the ongoing problems have taken a personal toll. Crisis managers at a suicide prevention hotline in Bayamón, near San Juan, receive 500 to 600 calls a day from people around the island in varying stages of desperation. Some callers just want to talk about their loss of home or income or family members who have fled to the mainland U.S.

Discover: Number of Puerto Rican students added to each district

The influx from the island has hit every part of New York and required state and local agencies to mobilize to help families with an array of services — from housing, school placement, employment and even winter coats.

“The top need has been housing. Many are looking for employment. Most of the families we have spoken to that have come to relocate in the New York City area: They are planning to stay,” said Beatriz Diaz Taveras, executive director of Catholic Charities Community Services in Manhattan.

Nationally, about 24,400 Puerto Rican students have enrolled in stateside school districts, according to a report this month from the Center for Puerto Rican Studies at Hunter College in Manhattan.

Overall, more than 135,000 Puerto Ricans — out of a population estimated at 3.3 million in 2017 — may have relocated to the continental U.S. since the hurricane, the report estimated.

New York ranked fourth in the nation with about 11,200 new residents from Puerto Rico, according to data compiled by the Federal Emergency Management Agency.

Upstate easier to navigate for new arrivals but needs are many

So when people came to New York after the hurricane, they often settled where their family and friends were.

And that often meant to upstate New York, which has a lower cost of living and can be easier to navigate than New York City, some social-service groups said.

The need was apparent: When the Ibero League opened a Rochester storefront in November to help families, there was a line of 1,000 people. 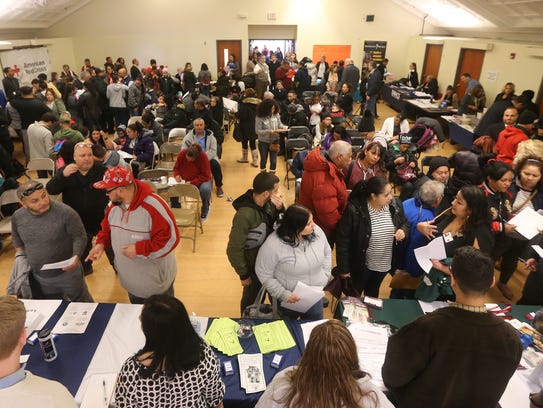 The school district and local agencies “have done a great job working with these kids, to the point where I talk to kids now, and they don’t want to go back to Puerto Rico,” Rosario Escher said.

The immediate needs are multiple and vary with every person and family, Rosario Escher said. Mental health counseling is chief among them, even while basic necessities are being arranged.

One woman moved her family into an apartment but had no furniture, so Rosario Escher went to a store with donated money and bought three beds and a sofa. There is a tractor-trailer filled with coats to pass out and English classes to arrange.

One woman came on the bus to get winter clothing and needed a way to bring it all back home.

“I said, ‘I can’t picture you getting on the bus with all that. Let me call you an Uber,'” Rosario Escher recounted. “She said, ‘What’s Uber?’”

“It’s not just getting here — it’s following up with them to see how they’re doing. … These people cannot believe there is a community that cares so much.” 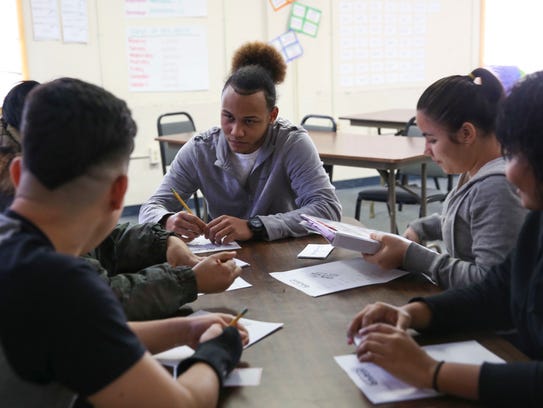 Misael Delgado, 17, works in a group during class at the Rochester City School District Center, Delgado came from Puerto Rico after the natural disaster and is now a student at the center, adjusting to life in Rochester. (Photo: Olivia Lopez, Olivia Lopez/@olopez4/Staff Photographer)

In the classrooms of the Rochester City School District Bilingual Center, the students are surrounded by support and encouragement — from the bilingual teachers to the vocabulary translations on the whiteboard. Written on one, Miercoles, 14 Marzo 2018and under that, Wednesday, March 14, 2018.

Six months after Hurricane Maria, the students seem to have had no problem adjusting. The classrooms are decorated with posters covered in Spanish translations. In some rooms, Puerto Rican flags hang on the walls alongside pictures of the island.

Having a bilingual teacher makes all the difference for these students. On top of the potential language barrier, many of the students had to travel to multiple cities before making their way to Rochester.

Cheimily Garcia and Paola Delgado, both 13-year-old students, stopped in other cities before making their way to upstate New York. “School is easier here because the teachers also speak Spanish,” Delgado said. Before coming to Rochester, Delgado spent some time in North Carolina and attended a school without Spanish resources. “It’s easier to learn.” 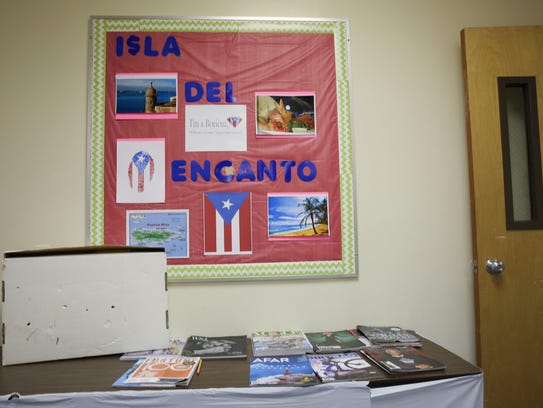 Buy PhotoIn one of the classrooms, the wall is decorated with flags and pictures of Puerto Rico. (Photo: Olivia Lopez, Olivia Lopez/@olopez4/Staff Photographer)

Cheimily went to Philadelphia and Oakland before she came to Rochester.

The encouraging environment starts with the staff. The bilingual social worker at the RCSD Center, Veronica Garcia Zeda, said her goal was to make the families more independent.

“I love it, it makes me feel good. I see the students improve fast and they help each other a lot in the program. If one student doesn’t know a word in English, the others will help them.”

But for smaller districts, it has been trickier: Some administrators said they had to ensure students were placed in schools with English-language programs because some of the children had limited English skills.

“What we did discover is that when the majority of the students came into our schools, we had to do a battery of assessments and see what their needs were,” said Binghamton Superintendent Tonya Thompson.

“And we believe that really allowed us to address some academic gaps and differentiate the instruction to meet their needs.”

State Education Commissioner MaryEllen Elia said the department put out guidance to the state’s nearly 700 school districts in October to ensure educators know how best to help and acclimate the students.

She said it was critical that “school could be a support mechanism to make sure the families and the kids were aware of services available in their communities.”

“Your fight is our fight”

New York has the largest Puerto Rican population in the U.S. and has had an influx of residents since Hurricane Maria struck the island in September. (Photo: Mark Lennihan, AP)

Gov. Andrew Cuomo has aggressively sought to help Puerto Rico with its reconstruction after the hurricane destroyed most of the island, and he has visited there on multiple occasions, taking supplies and state personnel with him.

He launched the Empire State Relief and Recovery effort to raise money and send experts, law enforcement and energy officials to the Caribbean island.

“We’re going to walk the road of recovery every step of the way, side by side, with Puerto Rico. These are American citizens, these are our brothers and sisters, we are going to rebuild a Puerto Rico that has never been before.”

Even before the hurricane, residents were leaving for New York and other states because of Puerto Rico’s struggling economy.

Assemblyman Marcos Crespo, D-Bronx, wrote a letter to Cuomo in January encouraging him to include $3 million in the state budget for each of the next two years to help Puerto Ricans when they relocate.

“Families arriving in New York have already found some stability in the great resources we provide, but more will be needed as additional families arrive and require assistance to assimilate to their new communities,” Crespo, chair of the Assembly Puerto Rican/Hispanic Task Force, wrote along with Assemblywoman Pamela Hunter, D-Syracuse.

Crespo said he’s hopeful the money will be included in the budget for the fiscal year that starts April 1, saying school districts are facing new demands to help the Puerto Rican students.

“The allocation requested above will ensure that our newest New Yorkers’ needs are met while ensuring a better transition to living in this great state,” he wrote.

Discover: Number of Puerto Rican students added to each district